This entry begins from the night before when we celebrated the imminent departure of a good mate of mine following a quick-fire week of hijinks in Tokyo. We had some epic nights out over the course of his stay, including seeing bands at a tiny rock venue called Fever in Shindaita to dancing to electro till 5 am at a bar in Aoyama. But this particular night happened to be a Wednesday night. We started with a very traditional Katsu dinner (which is basically schnitzel) served with fresh cabbage, steamed rice and miso, then headed to a local Akasaka pub for some beers and then hit what is starting to become a Wednesday night regular called A-life in Nishi Azabu. I would never even consider going to a place like this in Melbourne and most certainly not on a Wednesday night. But this is Tokyo and we must adapt and change to our environment. So we rocked up to the club sometime after midnight, were set up up brilliantly at a table next to the dancefloor by one of our other partners in crime on the night, and ordered some drinks. 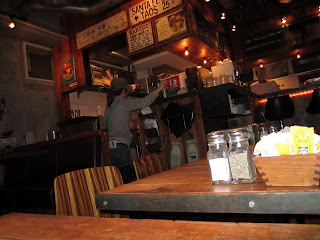 By about 12:30 the place was out of control, the dancefloor was packed and the young Japanese crowd were screaming along with the music - think 500+ Japanese clubbers in their 20's screaming Lady Gaga's "Poker Face". My good mate and I didn't need more than that so we jumped up out of our seats and pushed through to front and centre on the dancefloor and spent most of the night there making friends with the locals and dancing like fools! We kept that going till about 4 am when I realised that I needed to be at work in about 5 hours' time (unlike the other guys I was partying with!). So we jumped in a cab and took it directly home. Thursday was a tough one at work and I got through it thanks to a solid bowl of Ramen for lunch and a big bottle of water. But throughout the day, all I could think about was eating a big greasy hamburger. Not your fast-food variety, but more your uber-gourmet variety. 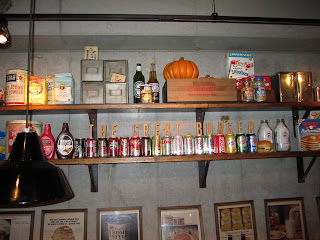 So I had a look on the Tokyo blogs and forums and found a very highly recommended burger place only a few stops away from Akasaka in Harajuku, and with a name called "Great Burger" how could we go wrong? On another blisteringly cold Tokyo night, we jumped onto the subway and after the standard Tokyo destination search we found it in a small street which was 3 streets off a main road. The place looked like a replica rustic American diner filled with ubiquitous Americana items like boxes of Oreos, pictures of Colonel Sanders, etc. The menus were presented to us by a friendly waitress and the choice of burgers was immense - chilli, avocado, mozzarella paprika, traditional cheese, gorgonzola, hickory, teriyaki egg, and so on. We hurriedly ordered - for me it was the double cheeseburger with bacon and egg. I wasn't holding back. My cohort ordered the straight-up double cheeseburger. The place was deserted apart from two older Japanese women who must have been giggling at the sorry state the two of us were in. 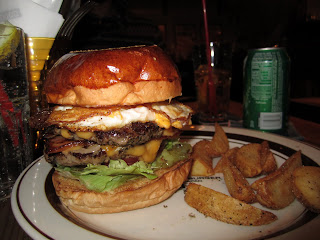 After a short wait, the burgers arrived and I felt like my prayers has been answered - see photo. The bun is called a "natural yeast" bun and it was just right, the meat not too heavy, rich and well cooked, tomato, relish, mayonnaise, chopped onion, cheese, lettuce and bacon all fresh and complementing the other as the ingredients in any good burger do. We both looked at each other wondering how the hell we were going to eat the damn thing due to its size. No chopsticks on the table and the knife and fork were clearly never going to work. Of course the Japanese have come up with a very logical solution - they give you a kitchen-paper pocket that you drop the burger into so that the juices drip into the bottom of the pocket, rather than all over you. I asked my friend if he would be using the pocket method but he had already dug in and said it was too late. The giggling from the next table continued whilst he devoured his pocketless burger with his bare hands. Oh, and when I said devour, I meant inhale. Granted the burgers were outstanding and we were starving, but I have never seen anyone finish a burger that quickly. I estimate somewhere between 7-9 minutes for the burger, and the meagre serving of chips, to be gone. To put this into perspective, the other diners sitting next to us had been served their burgers shortly before us and by the end we both had finished our meals and desert (chocolate brownie and apple pie each with vanilla ice cream) by the time they were done with their burgers! The giggling continued unabated. 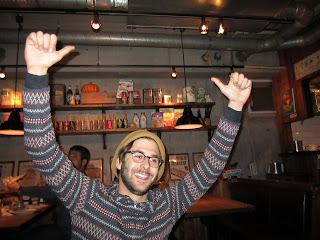 I've tried to stay away from eating too much Western food as what I have generally had so far has been average - a caesar salad which only contained cos lettuce and parmesan, a bland margherita pizza and a mediocre burger were enough for me to avoid it all costs. But the Great Burger may be the turning of the tide!

For those of you who are in Melbourne and are looking for some good burgers, I recommend the following:

5. I am leaving number 5 as a tribute to Greasy Joes in Acland St, St Kilda. Last time I walked past it looked like it had shut down, the time before I went there it was terrible. But for a very long, long time, Greasy Joe's was the absolute hands-down best burger place going around ole Melbourne town and was packed full with an eclectic mix of St Kilda locals. The servings were US style health risks but the burgers were incredible. No, they were not the refined wagyu beef burgers that pervade my recommendations above, but they were juicy, tasty and you never left hungry. So, from Tokyo, Vale Greasy Joes - gone but not forgotten.
Posted by BigRed at 7:08 PM